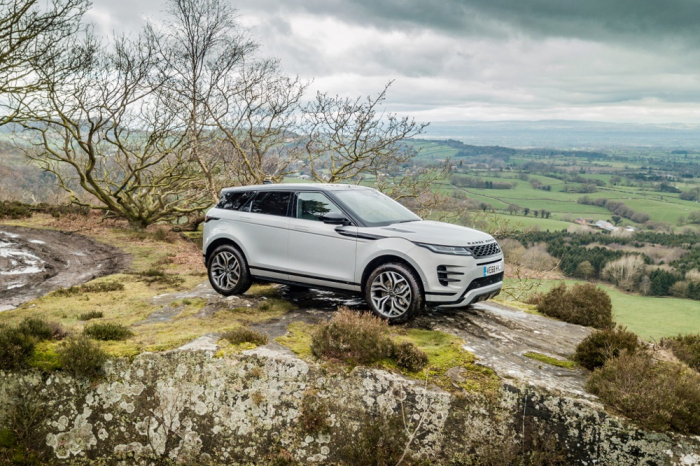 There’s a great deal of expectation with this second-generation Evoque. The car it replaces is one of Land Rover’s most successful models ever, proving extremely popular with leasing customers. So replacing it has seen the company’s engineers take considerable care over the new one.

The styling is reassuringly familiar, but certainly new and sharper than before. Work has been done on improving practicality, too, an area where the old Evoque struggled. This has partly been tackled with added space inside, but technological trickery has helped the cause, as well.

In a first for the brand, the Evoque features a ‘ClearSight’ rear-view mirror. This turns the conventional mirror into a screen, with a view of the road behind from a camera mounted on the car’s roof. It allows for a wider view, and also gets around the poor rear-ward visibility the styling creates. It works well in certain situations, but takes a bit of time for the eyes to get used to a screen, rather than a mirror, when turned on.

The rest of the interior has been overhauled, with a welcome improvement in quality, plus Land Rover’s lovely twin touchscreen system. There’s the option for an eco-friendly trim too, and the whole cabin feels like it comes from a larger and more expensive car.

A new platform cuts weight but improves rigidity, and it shows. The increased refinement it allows shines through, and the Evoque feels both more grown up and agile.

Engines include a range of petrol and diesel units, all of which do a good job, even the entry level D150 diesel option, producing 150hp. There is a six-speed manual gearbox offered with this version, but all others come with Land Rover’s smooth-shifting nine-speed automatic transmission.

The majority of the range are 48-volt mild-hybrids, which uses a beefed-up integrated starter motor to improve efficiency. A plug-in hybrid is due later in the year, which is expected to be very popular with business leasing Evoque customers, judging by the success of the part-electric Range Rover and Range Rover Sport.

Performance ranges from almost sluggish to pretty brisk. Acceleration times start at around 11 seconds 0-62mph, but the most powerful P300 petrol model will see that dip under the seven-second barrier.

As you would expect from a Land Rover, the Range Rover Evoque can comfortably tackle the rough stuff. Don’t let its fashionable exterior fool you: the Evoque can tackle slippery slopes, tough terrain, and wade through water just as well as any other Land Rover – even if it’s never likely to.

Drivers wanting the lowest running costs on a business lease will need to wait for the plug-in hybrid model to arrive. Until then, the diesel options will likely prove cheapest to run.

Unusually, the Evoque has a RDE2-certified diesel engine, which reduces tax for leasing customers. The diesel supplement is waived on car tax for all drivers of the D150 FWD manual model, while it also reduces benefit-in-kind costs for business leasing customers thanks to no 4% diesel BIK supplement.

The D150 AWD automatic tested returns 50.4mpg according to the official figures. On real roads, the trip computer was reporting around 44mpg, though that’s over some hilly terrain and a spot of off-roading. On more conventional runs, the figure was closer to the claimed figure.

Range Rover Evoque verdict - would you want to lease one?

The Evoque has always been a stylish model, but it was somewhat flawed in its previous iteration. This new Range Rover Evoque has worked on many of these flaws, and puts in a strong all-round performance.

A choice of engines will see a model suit just about every need, and running costs will be lower than those previously leasing an Evoque. The ride is refined, performance good, and practicality improved. There’s an air of quality to the Evoque’s interior too, despite this being the ‘baby Range Rover’.

And that’s just what the Evoque is now, a true baby Range Rover. All the qualities you would expect from its famous stable-mate, just in a smaller package. Take a look at the leasing offers on this website. Range

1st Choice Vehicle Finance Ltd has the Range Rover Evoque available from £213+VAT on a 4year, 9+47, 5k miles pa deal. Contact us on 01323 489806 to find out more and discuss your Land Rover leasing requirements.