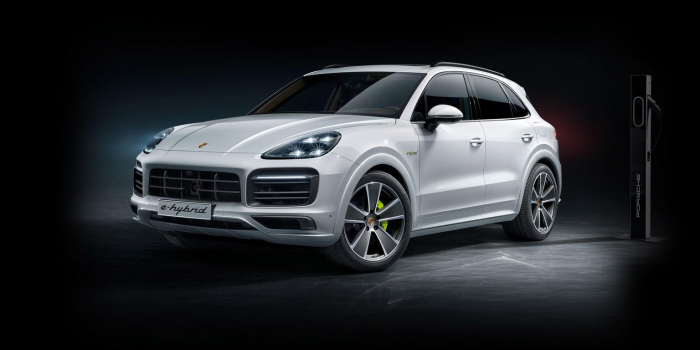 We have recently been talking a lot about electric cars, but Hybrids still have a foot in the door for new car sales and leasing and the new Porsche Cayenne E-Hybrid looks set to be an impressive offering, combining the benefits of a great SUV with Hybrid Technology.

Hybrid Technology
Porsche first started incorporating hybrid technology into its first generation Cayenne back in 2007. The new 2018 model is fitted with a 3.0-litre V6 petrol engine which is mated to an electric motor. This provides 456 of BHP and 516lb of torque but the really impressive figure is its MPG.

Engine performance
Official tests have indicated you should be getting 88mpg from this vehicle. And if you want to run on electric power alone, you can travel almost 30 miles and hit a top speed of 84mph without ever engaging the V6 Petrol engine.

As to be expected there are a number of driving modes which can be selected from the steering wheel. These include Sport and Sport+ but also an electric-only mode and an intelligent hybrid mode which lets the car decide which is best. For those wanting to take advantage of the V6 and the electric motor, the Cayenne is also fitted with a boost feature which will engage both simultaneously giving you the full power of both for 20 seconds. Great for those fast getaways!

One advantage to electric and hybrids can be the running costs with regard to tax and fuel. The new Porsche Cayenne qualifies for the under 75g/km emissions which means it will be exempt from the London Congestion charge - ideal for road commuters who travel to the capital each day. Combined with the MPG figures, it makes this vehicle look very cost effective to run.

Luxury
Even with its green credentials, many users will still be judging their next purchase on the luxury provided by a vehicle.

The good news is that Porsche has kept the interior pretty much identical to the regular Cayenne. The major changes to the E-Hybrid are to the displays on the driver's information screen.

Summary
If you are looking for a luxury SUV Hybrid which can travel into London’s Congestion zone, this could be worth a look